Born in Berlin, Susi Steinitz Ettinger immigrated to the United States in 1939. After graduating college in Kentucky, she moved to New York where she became one of the first female lecturers at the Metropolitan Museum of Art. Throughout the 1940s and 1950s, she was a free-lance cartoonist; her cartoons were published in Colliers, The Saturday Review, Esquire and Judge. A job transfer for her husband brought her to Springfield, Missouri in 1964 where she became a professor at what was then Southwest Missouri State, eventually retiring from the university in 1984.

Ettinger’s work is hard to define; pulling from multiple styles, she has worked with a wide variety of media ranging from conté crayon drawings to collage. One commonality running throughout the work is the creation of ciphers and glyphs, Ettinger has invented her own personal symbolic language, pulled from Amerindian pictographs, Paleolithic and prehistoric cave markings and hybrid-izations of forms. She uses this personal language as a method of psychological exploration and release. Although no longer able to paint, she continues to create collage work with Photoshop. She lives in Baltimore, Maryland.

This exhibit will feature work borrowed from the artist, a number of private collectors as well as the Springfield Art Museum’s permanent collection. 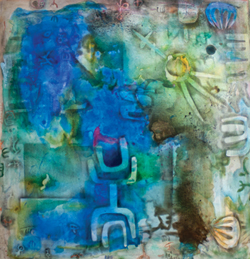